The adventures they go on are always a treat to see.  They could be pirates fighting with swords, or ballerinas dancing on a stage, or recreating the scenes of Bolt.  This is what my three younger kids do on a daily basis besides playing the normal game of tag in the house.

Sometimes I reenact with them and sometimes I just watch since their adventures are more interesting then what is on the television or what I’m reading at the time.  It shows how much imagination they have and how much fun they can produce to battle the boredom in the house.

So they make up their own fun instead.  Their generation is starting to depend on too much technology and not enough social face to face time with others.  They seem to be the happiest when they are doing their adventures instead of being on a device.

I see teenagers and other smaller kids playing video games, or on their tablets, or on their cell phones and not paying attention to anything around them.  I also watched two kids texting each other and they were less than five feet from each other.  I’m not condemning the use of any electronic devices by kids but to have limits on them.

By doing this with my oldest son, he is 2 grades higher in Math and Science then what grade he is in.   He also loves to read and play his musical instruments.  He also loves playing on his tablet and play video games as well.  But his love of reading and his grades in Math and Science would not be there if we allow unlimited access to the tablet and video game consoles we have.

How do you limit or do you even limit the amount of electronic devices your kids play with?  What are your thoughts about this?  Feel free to leave your answer in the comments and I will respond to the questions you have. 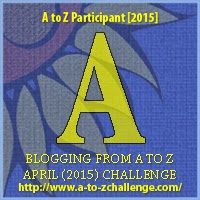 A to Z Challenge
Letter A

I’m a very busy father of four kids. I have a full-time job during the day and a father/blogger by night. I have been married for 13 years this year. I have four very energized children that keep my wife and I on our feet. We have two boys and twin girls.

Let’s Connect With Each Other

Vote for my blog by clicking below!